An experiment went wrong, the mad scientist from game provider Betsoft went even madder for winnings after this! The sequel from the original "Mad Scientist" is insanely crazy ... in paying out!

If the scientist from Frankenslot's Monster slots isn't mad enough for you, you can always spare a visit to Madder Scientist. With the Madder Scientist slot, Betsoft is releasing another Halloween-worthy online slot at Slots Capital Casino on the 20th of October 2022. Just 10 days before the spookiest day of the year!

Get to Know the Lab!

How do you imagine a laboratory of a crazy scientist who is after the formula of the big win? Since Betsoft slots always score with their design, you will see clear visuals right from the starting sequence. You will not have to think too long about what the lab of the sequel slot game may look like. The lab of Madder Scientist is full of levers for the five reels, different buttons to press for the features and chemical mixtures, microscopes and glass jars. With the 3D graphics, you will find high-end details in the reels.

An old laboratory often is associated with the sounds of pumping machines. No wonder it sounds like machines would start pumping all their force into the reels to let them roll. Besides the authentic sound while you start the machines you enjoy funny yet dramatic music playing in the background. Of course, it is that way, because how else would you get the flair of a scientist who became even madder than before? 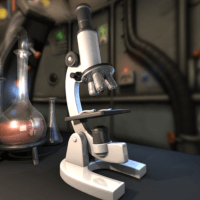 Every casino slot game has a main character that appears throughout the story. Since the laboratory of the madder scientist game seems to be a secret, only three characters do appear, besides the lab equipment.

With the newer update of the game, Dr. Walter Prescott got a more detailed look (and madder so to speak). Since his last appearance in Mad Scientist, he couldn't resist his eagerness and kept on searching for the right formula for the big cash in the Betsoft games. He appears in the slot game as one of the higher-valued game icons on the reels. In the Madder scientist slot, he is not alone!

The black-haired lady in the white lab coat assists the scientist with his mission. She is one of the higher valued slot symbols appearing. With her charm and support in finding the perfect mixture with the three beakers you will get credits depending on how often she appears on the reels.

Last but not least, this time the Madder Scientist Game offers you another character with a higher value if showing up on the slot field. The rabbit might be worried about his carrot when Dr. Walter Prescott is experimenting with it, but we can assure you, it is just for your benefit! 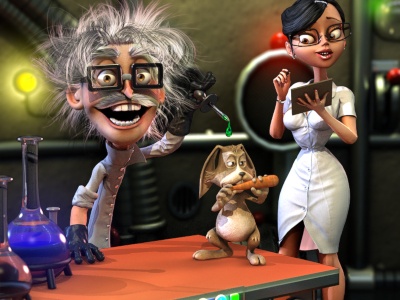 Crazy Sparkles and Fantastic Features in the Scientist's Lab

The online casino game offers lots of variety when it comes to symbols and also to features. No danger sign can hold you back from experimenting for the big wins, great! Then you might want to hear about the features that will boost your play in Madder Scientist.

The wild symbol of Madder Scientist is represented by the icon of electrical switches. The heavy light blue switch can't be unseen, especially if it expands. Yes, you read that right! There is an expanding wild in the Madder scientist slot machine and it even sticks there for certain amount of spins. Get three switch symbols anywhere on the reels and your gaming experience will be on another level. While the expanding and sticky wilds are active, the game will add +1 spin with expanded wild for each additional wild symbol you trigger while the wild reel is active. Bigger wild switches means bigger wins!

Playing Madder Scientist offers you to respin an individual reel of your choice. After the main spin is finished rolling, you can click on the reel you want to respin. Before clicking on the desired reel, you will see how much re-spinning that one will cost you. With this feature, you have the chance to generate certain winning combinations or trigger bonus features of the game. This feature is increasing your winning chances in the main game only.

If three or more carrot symbols appear on the slot game, you activate the bonus round. In this bonus game, you have to help the scientist to come up with a mixture that possibly is awarding you with a cash prize. After the feature loads, you will see a short sequence of the madder scientist and his assistant, in the lab.

After that, you have to choose which liquid you want to use as a base, stabilization, and so on. Simply click on the coloured chemicals and they will be mixed together one after another. The worried-looking rabbit always has its eye on you and the experiment, hoping for a golden carrot! While the rabbit wants a glorious carrot, you may be awarded with real money or with free spins, depending on what the mixture resulted in. 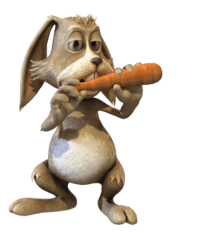 Ready to Mix Your Winning Potion?

With funny in-game sequences when the features are starting, the game definitely stands out from all other online slot games. It gives you a fun time similar to if you would play a video game. You can play the slot game with all its bonus rounds on your computer, as well as on mobile devices if you need entertainment on the go.

Since the Madder Scientist slot is a perfect match for Halloween, great bonuses for the game will await you soon! From free spins to match bonuses, at Slots Capital online casino exclusive bonuses are coming your way.

Other games you might like to play in the spooky season are Frankenslot's Monster (another new release from Betsoft), Dead Beats, or others from our Halloween Games selection.

Are you brave enough to step into the labor of a crazy scientist? Play Madder Scientist as soon as it is out and win real money online.