Paddy's day is close - get green and lucky!

Have A Lucky St. Paddy's Day! 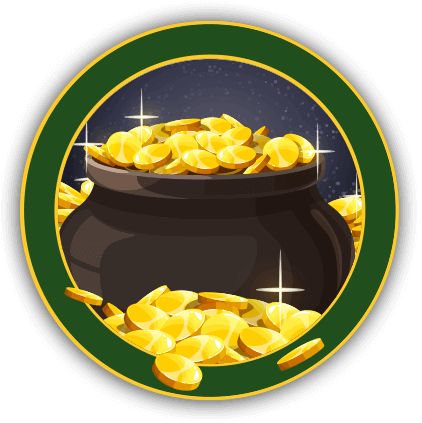 Celebrated on March 17 to honor the foremost patron saint of Ireland, St. Paddys Day is very popular worldwide. Almost around the globe, people wear green and toast their drinks in the name of St Patrick. At Slots Capital we are all in green, wearing shamrocks along with our hats, and are ready to celebrate!

The festivities generally involve public parades, festivals, green decorations, shamrocks, and much more. Historically, religious restrictions on eating and drinking alcohol were lifted for the day, which encouraged the tradition of consumption throughout the celebrations.

It is said, though, that the real saint Patrick was actually born in Great Britain around A.D. 390 to an aristocratic Christian family who owned lots of riches. At 16 years old, he was kidnapped and sent overseas to tend sheep as a slave, where he became a very deeply believing Christian.

The now-famous young Patrick arrived in Ireland to convert the pagan Irish to Christianity and change the country's course. He died on March 17, 461, after 40 years of living in poverty, teaching, traveling, and working tirelessly. Many stories and legends grew around Patrick and have now culminated into a world-scale celebration.

Coming from the Irish culture, the original Irish name of Patrick is Pádraig. Thus the abbreviated version is retrieved from it and therefore is Paddy. Patty is considered to come from the name Patricia or, even worse, is associated with a burger patty itself. Therefore if you want to use the shortened version, you would say "Paddy's day" when you refer to St. Patrick's day.

Year in, and year out, people of Irish heritage (and pretty much people from all backgrounds) celebrate this day with religious services. Feasts, where usually dancing, singing, and even gambling, are seen everywhere.

Before we go into detail, let's clarify what "Cèilidhs" means. It is a traditional Irish social gathering that usually involves dancing and playing folk music at a house party or in a bigger hall. Think of them as the discos and nightclubs of yesterday. Cèilidhs facilitated courting and marriage prospects for young people and still play an important role for young people in rural parts of Ireland and Scotland.

Nowadays, Cèilidhs are combined with popular culture due to their worldwide diversity. Acts also include electronic dance music, jazz, rock, and ska that combine their music with the traditional Irish sound.

There are more than 32 million US residents with Irish ancestry (about seven times the population of Ireland). This might explain why it was there that St. Patrick's Day became a colossal celebration that now extends to dozens of countries around the world.

St Patrick's Day Parade has been celebrated in New York since 1762, making it one of the oldest in the US and one of the world's largest parades overall. Traditionally held on March 17, the parade draws around 150,000 people and two million spectators each year to Fifth Avenue in Manhattan!

While New York might have more manpower, Chicago has a spectacle all on its own. People there have been coloring the Chicago River green since 1962! The river is always dyed on the morning of Chicago's St. Patrick's Day parade, which takes place the Sunday before St. Patrick's Day.

The oldest recorded St Patrick's Parade was actually held outside the US or Ireland. On March 17, 1601, Ricardo Artur, an Irish vicar in a Spanish colony, was probably one of the first to bring this tradition outside Ireland.

More than 100 years later, homesick Irish soldiers serving in the English military marched into Boston in 1737 to become the first ever to do so on American soil. Today millions of Americans of Irish ancestry celebrate their cultural identity and history by enjoying St. Patrick's Day parades.

Even the US president celebrates St Patrick's! Every year (since 1952), the US president is given a crystal ball filled with shamrocks. At the time, the Irish ambassador, John Hearne, sent a box of shamrocks to President Harry S. Truman! So much to the background of this tradition. 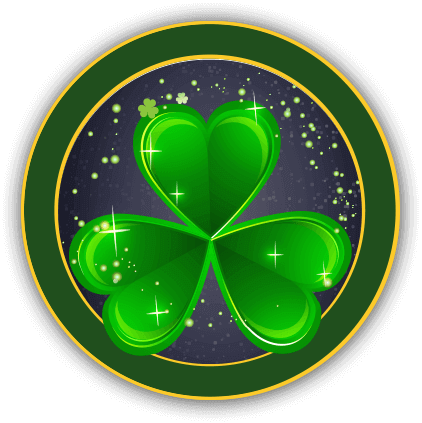 The good luck of the shamrock actually began as a revered pagan symbol and still remains to this day. It is said that Patrick used its three leaves to explain the Holy Trinity. It is considered lucky to "drown" the shamrock - dunking it into a glass of whiskey. When the whiskey was drunk, the shamrock at the bottom of the glass would be thrown over the drinker's left shoulder. Legend says it was St. Patrick himself who dunked the shamrock for the first time.

Shamrocks are also famous for the four-leaf clover. Biologically speaking, four-leaf clovers are rare, as they usually only have three clovers. A fourth clover is basically a mutation. Since they are so rare to find out in the open, finding one simply makes us feel lucky. So next time you come across one, try logging into an online casino and see where your luck takes you!

It's considered lucky to wear and use the color green during St Patrick's Day celebrations. Still, the color has a deeper historical meaning, symbolizing the stand against British colonialism for Ireland. As a way to identify with its culture, the green in the Irish flag represents Catholics (while orange represents Protestants, and the white symbolizes peace between them). Also, Ireland itself is known as the 'Green Isle.'

Another reason to wear green on St Patrick's Day is that leprechauns cannot spot people in that color. If they do spot, someone, they will pinch them! Tradition says people are allowed to pinch anyone not wearing green on this day!

… But We Should Actually Wear Blue

Historically, the Order of St. Patrick knighthood wore blue. It was also the color of the first coat of arms when England's King Henry VIII created the Kingdom of Ireland. Actually, the national color of Ireland is blue - St. Patrick's Blue - as opposed to the popular belief that only green has to do with this country.

The color green became associated with this holiday after it was liked by the Irish independence movement in the late 18th century.

Saint Patrick's day was already celebrated by the Irish back in the ninth and tenth centuries. Still, it was later that he became widely seen as the patron of Ireland. St Patrick's day sometimes falls during Holy Week, which prevents people from celebrating it as they usually do. This happened in 1940, when Saint Patrick's Day was observed on April 3 to avoid coinciding with Palm Sunday, and again in 2008, when it was officially celebrated on March 15. The next time it falls within Holy Week will not be until 2160, so the Irish won't have to worry too much about it for a while.

While being an Irish tradition, it wasn't until 1996 that the first St. Patrick's Festival was held in Dublin, and in time became a multi-day celebration: In 1997, the holiday became a three-day event, and by 2000, it was held for four days, and in 2006 it was finally extended to last five days long!

Celebrations in Ireland include concerts, outdoor performances, fireworks, and Cèilidhs, and Dublin hosts around 1 million visitors overall. Many other cities and towns in Ireland hold their own parades and festivals as well, with cities like Cork, Belfast, Darry, Galway, and Waterford all joining the fun!

Besides the famous parades in New York, Boston, and Chicago, St Patrick's day is also celebrated by thousands of people worldwide. Here are some of the most compelling examples of celebrations: 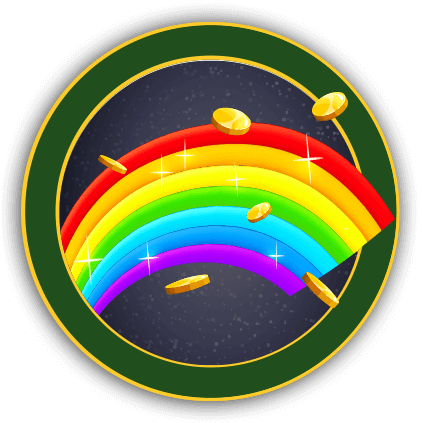 A Glass Full Of Spirits

Beer is one of the most widely consumed beverages on St Patrick's Day. The Irish beer "Guinness" is the top choice among attendants. An incredible 13 million pints of Guinness will be consumed worldwide on March 17. Which is around 174% more beer sold on St Patrick's Day than on any other day. That being said, it is the 4th most popular drinking holiday. But hey, no other date could beat New Year's Eve, not even Paddy's day!

It's Patrick's day - a day of luck, so why not try your luck in the slots? Who knows, maybe you will find your pot of gold at the end of your next spin.

Since 2021 the lucky leprechaun Lucklan O'Winnagain has joined Slots Capital's St. Paddy's Day themed slots in "Dublin your Dough." Lucklan himself appears as sticky wild with the multipliers of 2x, 3x, or 4x. The low volatility makes the game a perfect start for your winning streak!

Emerald isle is waiting for you at the end of the rainbow! Check out what the 5 reel slot game has to offer you. On the emerald isle, you may come across a red-headed beauty, and a classical Irish leprechaun dressed all in green! The Slot "Pot of Gold" deserves its name as it has a progressive jackpot worth between $2000 and $5000 available for you. Any bet you place could be your lucky moment!

Find your gold pot at the end of the rainbow! This 3x3 slot with 5 paylines and medium volatility is a perfect start in your st. Paddy's Day celebrations. With familiar icons connected to St. Patrick's Day, the "Leprechaun Frenzy" slot is filled with luck! Trigger the Leprechaun's Mega spins with three consecutive wins. Sometimes we need to push luck a bit; thus, you can also use the buy-feature option!

You celebrate St. Patrick's day in different ways, not just one way. Obviously, you drink and eat lots of food, but you also wanna have fun, right? You can wish someone a happy Paddy's Day or play "Irish Wishes" at Slots Capital and hope for the best! Wherever it is a three-leaf clover or an ancient stone cross, these lucky charms guide your way to big winnings! This slot fully celebrates Irish magic with free spins, a wild symbol, and a pick-a-prize feature.

Ever used the phrase "wish me luck," especially when you have been excitedly looking forward to something? Saucify's slot "Wish me Luck" offers you an extra portion. You will encounter a gold pot, a rainbow, a lucky well, and a golden pot filled with coins. Make your dreams come true with a gold pot multiplier of up to 500x of the total bet!

Time To Get Lucky

It doesn't matter where you are in the world. If you're feeling lucky, take out your green (or blue!) clothes and start celebrating your way! Head to a pub and join in the celebrations, or attend the parades and have a day out. Also, why not give it a try at the slots and win huge cash prizes on this day? Who knows, you might find your virtual four-leaf clover and hit the jackpot!