Join Lotty on an adventure among dinosaurs

The JURASSIC bonuses are waiting for you! 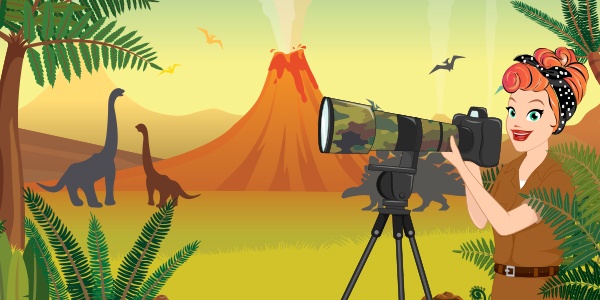 Travel to the legendary island with us, to Jurassic World!

These magnificent creatures are just waiting for you! This time Lotty travels to the island of Jurassic World to seek new adventures. Will you join her? You can enjoy our dinosaur themed game: Million Reels BC Dinosaurs are a diverse group of reptiles of the clade Dinosauria. They first appeared during the Triassic period, between 243 and 231 million years ago, although the exact origin and timing of the evolution of dinosaurs is the subject of active research. They became the dominant terrestrial vertebrates after the Triassic–Jurassic extinction event 201 million years ago; their dominance continued through the Jurassic and Cretaceous periods. Reverse genetic engineering and the fossil record both demonstrate that birds are modern feathered dinosaurs, having evolved from earlier theropods during the late Jurassic Period. As such, birds were the only dinosaur lineage to survive the Cretaceous–Paleogene extinction event 66 million years ago. Dinosaurs can, therefore, be divided into avian dinosaurs, or birds; and non-avian dinosaurs, which are all dinosaurs other than birds.

Check out our special MEGA BONUSES!