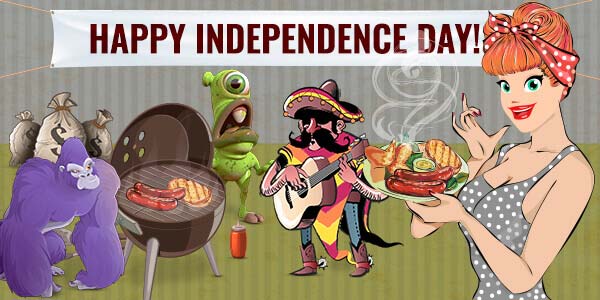 Independence Day, best known as the Fourth of July is the most important holidays in the United States, commemorating the Declaration of Independence on July 4, 1776. Nowadays, displays of fireworks, parades, barbecues, carnivals, fairs, picnics, concerts and other ceremonies are held across the country (and even across the world) to celebrate the history, government, and traditions of the United States.

While the official day of independence was on 1775, 4th of July has actually been a federal holiday since 1941. Celebrations on this day, though, date back to the 18th century after Thomas Jefferson drafted the Declaration of Independence. Independence Day on 2020 will be celebrated on a Saturday.

Check out our upcoming July bonuses!

The American Revolution broke out on April 1775, which wasn’t initially supported by all colonists at the beginning, but became more and more powerful within one year. By the middle of 1776 and thanks to growing hostilities against the British and the spread of an American revolutionary spirit, many more colonists came to favor the independence.

Some believe that July 2nd should be the correct date on which to celebrate America’s independence, like the second president of the United States - John Adams. He would reportedly turn down invitations to appear at July 4th events in a form of protest. Ironically, Adams died on July 4, 1826, on the 50th anniversary of the adoption of the Declaration of Independence.

Within 150 years, The Thirteen Colonies grew from around 2000 people to 2.4 million between 1625 and 1775, and had a level of self-governance and even local elections, resisting the British Empire’s demand for more control over them. A decline in their relations with the British led to the American Revolution, in which colonies worked together to fight the American Revolutionary War.

Early 4th of July celebrations were actually adopted from pre-Revolution years, when colonists held annual celebrations of the king’s birthday and included ringing of bells, bonfires and processions. Once the independence was made official, concerts, parades and the firing of cannons marked the first public readings of the Declaration of Independence.

As a way to lift the spirits and the patriotic sentiment of soldiers, George Washington issued double rations of rum for them to mark the first anniversary of independence in 1778. Massachusetts became the first state to make July 4th an official state holiday.

Other early celebrations that took place in a manner a modern American would find familiar were found in Philadelphia: an official dinner to commemorate the day, toasts, gunshots, speeches, prayers, music, parades, troop reviews, and fireworks all took place within the city!

Bring On the Fireworks!

If there’s one thing people around the world think of whenever the date is mentioned are fireworks. But the first fireworks in the world were not used in America, they were actually used as early as 200 BC on the other side of the world, China, where they would roast bamboo, which explodes with a bang when heated. Centuries later, Chinese alchemists would mix together saltpeter, charcoal, sulfur and other ingredients to (unwillingly) create the marvelous form of entertainment that we know today.

In the newly established United States, the tradition of setting off fireworks to celebrate 4th of July began in 1777, on the first organized celebration after the day of independence. Thirteen gunshots were fired in salute to the Thirteen Colonies in the morning and in the evening in Bristol, Rhode Island. On the same year in Philadelphia, ships cannoned 13 guns as well as a grand celebration of fireworks, illuminating the city.

4th of July is nowadays a federal holiday, which means all non-essential federal institutions are closed on that day, and pretty much every person in the country joins in the celebration of the nation’s heritage, history and its customs - or just take the day off from everything!

Several outdoor activities are enjoyed on that day by millions of families such as attending a picnic or a barbecue and gather with friends or relatives. Houses and cities are usually decorated in red, white and blue colors (just like the American flag), and parades often take place in the mornings.

In the evening, huge fireworks displays light up the night sky in open spaces such as parks, fairgrounds, town squares and even within neighborhoods. Fireworks are often followed by patriotic songs such as the national anthem and other local songs like ‘Yankee Doodle’ in northeastern states and ‘Dixie’ in southern states.

Boston: No city celebrates Independence Day like Boston, where it’s called Harborfest. Celebrations there last a week and attract around 3 million visitors every year! Parades, harbor cruises, live music and even a ‘chowderfest’ are held during the celebrations.

New York: Perhaps the biggest celebration of the bunch, New York attracts millions of people celebrating from the city’s rivers, parks and rooftops. They host the largest show in the country: The Macy’s 4th of July Fireworks.

Washington DC: The country’s capital shows their patriotic devotion with parades featuring military personnel marching and rolling along 10 blocks of Constitution Avenue, fly-overs, and even a speech by the President of the United States.

Los Angeles: The biggest city in California hold beach parties, picnicking and live performances all along the city, as well as free fireworks in downtown L.A. and a parade in Pacific Palisades.

New Orleans: NOLA’s musical DNA is shown at Louis Armstrong Park with a live 4th of July concert, as well as a New Orleans style parade and other activities across the city for people of all ages.

Hot dogs: A real organization called The National Hot Dog and Sausage Council declared the month of July as National Hot Dog Month, and on July 4 more than 150 million hot dogs are eaten across the country. But not only sausages are eaten on this day: Barbecues are arguably the most famous 4th of July food tradition, with more than 74 million Americans enjoying to spend outdoors with their family around the grill.

Pie: Pies filled with fresh summer fruits, like apples and cherries, have become a 4th of July food tradition. They were brought to America by the first English colonists and were originally made of meat - it was in the US that the tradition to eat them as desserts started.

All Over the World?

People around the world also love to celebrate 4th of July together with their families, especially among American communities abroad. For example, Norway claims to host the biggest American Independence Day celebrations in Europe, with live music, barbecues, baseball and cheerleading taking place in their capital city Oslo.

In Sydney, Australia, 4th of July celebrations are considered the biggest in the Southern Hemisphere, where thousands of expats celebrate with barbecues, live music, free American whiskey and beer tasting, as well as trivia competitions and other games.

4th of July on Lockdown

With the current COVID-19 outbreak hitting the United States, almost every event associated with the national holiday has been cancelled even months before they happened. Events in states such as California, North Carolina and New York. Cancellations include festivals, parades, fireworks displays and pretty much everything that disobeys the stay-at-home orders from governments and healthcare authorities.

Given the situation, families around the country will have to find ways to have a big celebration at home and not to get discouraged by not being able to go outside. Some suggestions include:

Time to start to play!