Halloween is all about sweets, fun and slots entertainment at Slots Capital. Are you as hyped as we are?

Halloween is the day you have been waiting for all year. your spooky soul completely adores the season of ghosts & ghouls but something seems missing? Fear not friend! Slots Capital has what you are looking for.

Before we are starting with the witchy tips for your Halloween party, let's start with the basics.

Halloween takes place every year on October 31st. This year it falls on a Monday, thus more to party after the weekend. Many and more years ago, the Halloween festivities were called "All Hallows' Eve" to pay tribute to the All Saint's Day, which was coming after. After some time, the name turned into Halloween.

Halloween originally comes from the Celtic culture. It was said and believed that this day the curtain between our world and the the world of the supernatural was very thin. As cherry on top, it was believed that the souls of the dead returned this day. Additionally the last day of October marks the end of the warmer days and is welcoming the dark and cold seasons.

In the ancient origins, people started placing carved pumpkins on the front door to scare away the ghosts and dressed up. All this as kind of wards, so the haunting souls couldn't find them anymore.

After the years, Halloween transformed into a day full of trick or treat, candy and costumes. Commercials are advertising Halloween big on the media to make the best profit from it. The people love to throwing a spooky Halloween party or watching slasher films and incorporated all that in the American tradition of celebrating Halloween. 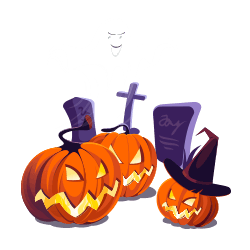 Besides haunted houses, ghosts and ghouls, there are a few animals that are fitting into the theme of Halloween night. As Christmas has its reindeer, Halloween has black cats, spiders, (were)wolves and many more. This not so frightening animals add a furry or feathery touch to every spooky story around the night of Halloween.

The furry black creatures are said to be best friends with witches. One may imagine a cat sitting on a witch's back while she is stirring the brew. Other stories say that witches can transform into those 4 pawed animals to spy on their surroundings without being noticed.

In many cultures, black cats are linked to bringing bad luck or even death to people who have to deal with illness. Until this day, black cats are a strong symbol at Halloween, doesn't matter if they look cute or with the devil in their soul.

The flying barrier of news in the realm - the raven. Being able to fly, and wearing black feathers made it easy for people to associate the raven with Halloween. In addition to that, if you see a raven or a crow, you should consider that a bad sign. It is believed that ravens are detecting souls of the dead, thus a bad omen if you spot them. Now the scene of walking through the woods, and then out of all sudden hearing the sound of a raven, sounds so terrifying, right?

These blood-sucking animals can't be forgotten. Since the bats are nocturnal, meaning they are active at night and live in caves, this might be the reason why people think of bats when it comes to Halloween. The flying creatures of the night are said to be followers of great vampire counts, if not a vampire themselves.

As you see, there are a few animals to talk about when it comes to Halloween. Which one do you know? Which ones are you afraid of?

We all know the typical Halloween movies. There is either a man dressed with a mask hunting the main cast, an alluring good-looking Vampire, who wants to lure you into the afterlife or a wicked witch wanting you to collect items for her spell on you.

Graf Dracula and Nosferatu are the most well-known vampires in History. Young people may not know them but probably think of the modern vampires Edward Cullen (from the Twilight Saga) and Stefan and Damon Salvatore (from Vampire Diaries). Neither of the last three can actually transform into a bat, but the older ones are for sure.

Get your garlic ready as there are some vampires seen at Slots Capital. Spin the reels with care and you will be rewarded highly!

Different from fairies, who are all about glitter, lovely little wings, and being cute and playful, witches are said to be riding a broom, wearing dark clothes, and living in the woods in a cabin. They have no fairy dust for the magic but they are very talented when it comes to casting spells.

Rest assured, the witches of Slots Capital only have good intentions for your Halloween party. Watch out, the witch might cast a winning spell on you! 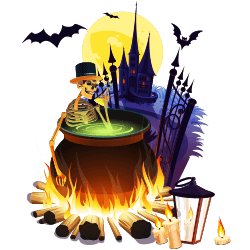 You are up to exploring Halloween with all it has to offer? No need to take a photo in a graveyard as a test of courage. Here are some must-do activities you should do this year, with friends and family.

Get going, the sweets aren't collecting themselves!

It may sound odd to you to go haunting for sweets in a costume. Trick or treat is by far the thing kids love to do. It would mean a lot to them if you join them. May they learn some tricks to get more candy from you? Be the bigger person, dress up and join them in.

Put on your most destroyed clothes, the scariest makeup or masks that you have and head to the next Halloween costume party in town! Show off your skills and make everyone scream. With all the Halloween costumes you might find inspiration for next year! Who knows, maybe you will win the costume contest!

Halloween parties are becoming more and more popular among adults. What would be the spookiest night without a smashing monsterball? Rock your zombie moves but don't lose your head! Howl to the song's lyrics and have fun. In the end, it is all about fun, right? Dance the worries away and have fun!

Last but not least; scare someone! Participate in a little Halloween prank, nothing too serious. Make your loved ones jump and scream, but don't forget to share a burst of laughter together.

If you are not the kind of party animal who wants to go trick or treating, sit down and relax a bit. At Slots Capital Casino you don't have to walk from door to door and ask for something sweet. We love giving our players a sweet and great casino time. Thus great and spooky bonuses are awaiting you here!

Claim one of the stunning promotions and enjoy the slots at the fullest. To enjoy the Halloween promotions you might want to play some games from our Halloween game collection.

In the slot field of 3 x 5 huge prizes are waiting for you! Dr. Frankenslot and his friendly monster waiting for you to join them! Behind the electrifying features lots of fun and winnings are hidden. With a minimum of only $0,20 you can spin the reels

The wicked 3 x 5 reel is all about spooky rewards. This dark slot with colorful icons in neon dust pays out in 27 lines. The expanding wild of a pumpkin headed scarecrow reminds you of Jack-o-lantern. The gorgeous witches will lead the way with their magic casts.

The slot with pure horror and yet fun at Slots Capital is Zombie Invasion. With the biohazard scatter button appearing three times on the field, the free spin feature will start. Join the group of survivors exploring the hospital of the escaping city feature. Open the right doors to get to the rooftop for freedom and the big win. We understand that this might be too scary for you. Perhaps you would like to go for a trick or treat in the next slot?

Probably you've heard this before, but the wording "I scream for ice cream" fits perfectly for the slot. This casino game is one of a different kind. Iscream slot doesn't have any payline but rather pays out depending on how many of the same icon does appear next to each other. If at least 9 of the same icons appear in the 5 x 6 field, you will be rewarded. Life is to short not to enjoy it's sweet treats.

In recent years we couldn't present and live our Halloween traditions as we may wanted to. However, this year is a completely different one. It is a new chance to let your spooky soul come out!

Are you ready for Spooktober and Halloween celebrations in the scariest night of the year? Hit the button, and start playing and winning. The sweets somehow have to pay off, right?