Enjoy the Carnival with us!

Get your 250% carnival Bonus until 31st of July! Ready to start? 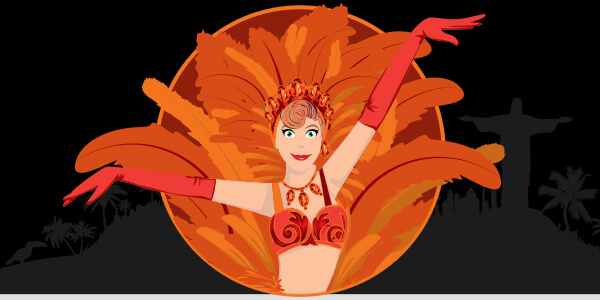 Hi there lovely beings, this is Lotty.

Have you ever been to the Carnival in Brazil?

It is celebrated all over the world and this time the carnival comes to Slots Capital!

The Rio Carnival has a long history, but has been in its present form since 1928.

The Rio carnival is the most famous carnival of all times, despite the fact that the home of the carnivals is Italy.

The carnival word comes from the Latin carne vale meaning farewell to the meat, although nobody would think that when you see the many skin showing costumes during the four-day event.

The Portuguese ancestor of the Rio carnival is Entrudo. Initially, the participants were tossed with water (Cologne water), wet powder or lemon peel in the midst of great joy. In 1855, the "carnival friendship of young people" was established. They made parades organized with musicians, dressed in colorful costumes, "cidade maravilhosa".

Essentially, these organizations are still organizing carnivals throughout the year.

The history of the carnivals goes back to the ancient times. The ancient Greeks celebrated every spring the god of the wine, Dionysus. The Romans took this habit: they called him Bacchus. Their celebration was called the Bacchanalia and Saturnali; when the servants exchanged their clothes with their lords while being drunk and celebrating.

In the Middle Ages, the Christian Church tried to suppress all pagan rituals and wanted to celebrate the first day of Easter´s 40 Day Fasting with a carnival. This, however, did not come as the church had expected: the carnival became a celebration of eating, drinking, music and sex for a week.

The first carnival in Rio was held in 1723 by Portuguese immigrants. People spent three days in masks on the streets, throwing water, mud and flour.

For the poor people it was forbidden

Rio's first costume ball was organized in 1840. About a decade ago the bands were playing on wagons pulled by horses, and by 1855, the richest of the carnival were dressed in breathtaking costumes. Until 1872, people in the working class could not even have seen the costumes dressed in costumes, but this year they could be dressed and attending the parade.

Competition of Samba Schools from 1928

Then they started to organize dance competitions of the Samba schools. This is the main attraction of today's carnivals.

Carnival in Rio is not surprisingly one of the world's greatest attractions. The parade takes place in one of downtown streets of Rio, and for the best places you have to pay about $ 50,000.

The gatherings usually begin late in the afternoon. From children to older people, everyone joins with cheerfulness, and there are orchestras which attract more than 10,000 attendees.

​Have fun with us! manifest your dreams with us, you only need a touch of luck to achieve your goals! Enjoy