Your source for breaking casino news. Get the latest on new casino development and new game releases! Our online casino blog features the most interesting, engaging and informative stories about the new games from Rival and Saucify!

Cleopatra’s Coins: Treasure of the Nile

Cleopatra’s Coins: Treasure of the Nile is here! 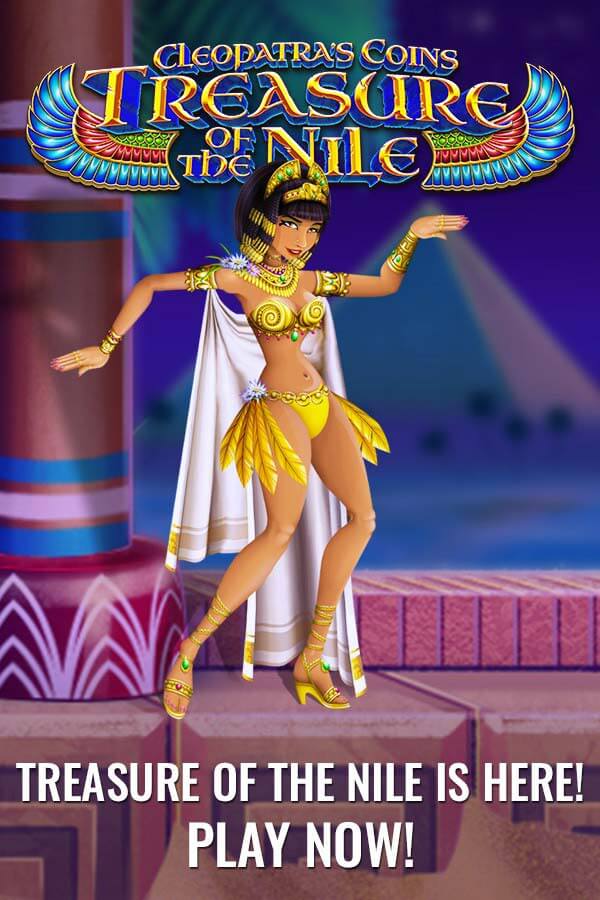 Cleopatra’s Coins: Treasure of the Nile

We are proud to announce the launch of Treasure of the Nile, a 50-line, 5-Reel Slot.

Join Cleopatra, Queen of Ancient Egypt, at her treasure filled palace on the shores of the mighty Nile River.

Cleopatra's Coins - Treasure of the Nile is the long awaited sequel to the hugely popular CLEOPATRA'S COINS slot. It features engaging animations, vibrant colours and artwork that will immerse the player in the land of the Pyramids.

When the WILD SCARAB icons align Cleopatra's palace becomes a place of mysterious good fortune as the scarab becomes a sticky wild. While active the sticky wild scarab can generate big coin payouts!

Slots Capital Casino players can join Cleopatra, Queen of Ancient Egypt, at her treasure-filled palace on the shores of the mighty Nile River in the new Cleopatra’s Coins: Treasure of the Nile slot game. The engaging animations in this long-awaited sequel from Rival Gaming immerse players in the mystical land of the pyramids. The casino is giving everyone 10 free spins. Those that make a deposit get 100 more free spins!

Cleopatra’s Coins: Treasure of the Nile is a captivating game with potential for colossal payouts. During regular game play, sliding palace blocks reveal gods and goddesses, amulets, coins, and the iconography of ancient Egypt. When wild Scarab icons align, they become sticky and bring good fortune to the palace. When wilds carry to the next spin, there can be payouts fit for a queen.

Cleopatra VII Philopator, most commonly known as Cleopatra, is the last Pharaoh to rule Egypt since she ruled the country for 21 years. She was one of the Ptolemaic dynasty's most important members, a family of Greek descent and a descendant of the famous conqueror, Alexander the Great. It is her appearance that makes Cleopatra one of the most notable figures in history.

Cleopatra was not of Egyptian descent

Although Cleopatra was born in Egypt, she traced her family origins to Macedonian Greece and to Ptolemy I Soter, one of Alexander the Great's generals. Upon Alexander's death in 323 B.C., Ptolemy took over the reigns of Egypt, and began a succession of Greek-speaking kings that lasted for almost three centuries.

She was born from adultery

Like many royal houses, members of the Ptolemaic dynasty also married to preserve the integrity of their bloodline within the family. More than a hundred Cleopatra's ancestors tied the knot to relatives or friends, and it's possible that they were brothers and sisters of their own. In accordance with this tradition, Cleopatra eventually married her two teenage daughters, each of whom acted as their official husband and co-regent during her rule at different times.

The charm of Cleopatra wasn't its biggest asset.

Roman propaganda portrayed Cleopatra as a debauched temptress who used her sex appeal as a political weapon, but may have made her image more popular for her intelligence. She spoke as many as a dozen languages and was trained in mathematics, philosophy, oratory and astronomy, and later she was described by Egyptian historians as a ruler "who raised the ranks of scholars and enjoyed their company." However, there is evidence that Cleopatra wasn't as visually stunning as she once felt. Coins with her portrait depict her with manly features and a broad, hooked nose, although some scholars claim that she intentionally presented herself as a show of strength as masculine. The ancient writer Plutarch, for his part, believed that the elegance of Cleopatra was "not entirely incomparable," and that it was only her mellifluous speaking style and "irresistible charm" that made her so attractive.

Power grabs and assassination attempts were as much a Ptolemaic tradition as family life, and Cleopatra was no different from her brothers and sisters. Her first brother-husband, Ptolemy XIII, chased her out of Egypt after she attempted to take sole possession of the throne, and the couple eventually faced off in a civil war. After teaming up with Julius Caesar Cleopatra reclaimed the upper hand, and Ptolemy drowned in the Nile River after being defeated in battle. After the battle, Cleopatra remarried to Ptolemy XIV, her younger brother, but it is suspected that she had him assassinated in a bid to make her son her co-ruler. She also ordered the assassination in 41 B.C. of her sister, Arsinoe, whom she considered a throne threat.

Cleopatra knew how to make an entrance

Cleopatra herself claimed to be a living deity, and she often used sophisticated stage techniques to charm potential allies and enhance her divine status. In 48 B.C., when Julius Caesar arrived in Alexandria during her rivalry with her brother Ptolemy XIII, a famous example of her talent for drama came. That Ptolemy's armies would hinder her efforts to pursue the Roman general; Cleopatra had covered herself in a carpet — some sources say it was a bag of linen — and smuggled into his personal quarters. The sight of the young queen in her imperial garb dazzled Caesar, and the two soon became friends and lovers. Later, Cleopatra performed a similar piece of theater in her 41 B.C. Meeting Mark Antony. Although invited in Tarsus to attend the Roman Triumvir, she is said to have embarked on a golden barge decorated with purple sails and rowed by silver oars. Cleopatra was made up to look like the goddess Aphrodite and stood under a silver canopy as her servants dressed as cupids fanned her, smoking sweet-smelling incense. Antony was immediately fascinated — who found himself the embodiment of the Greek god Dionysus.

She was living in Rome when Caesar was assassinated

Starting in 46 B.C., Cleopatra visited Julius Caesar in Rome and her presence seems to have caused quite a stir. Caesar did not hide the fact that she was his mistress— she even came with her lovechild, Caesarion, in tow, to the city — and many Romans were scandalized when he erected a golden statue of her in Venus Genetrix temple. When Caesar was stabbed to death in the Roman senate in 44 B.C., Cleopatra was forced to flee Rome, but by then had made her mark on the region. Her glamorous hairstyle and pearl jewelry became a fashion trend, and according to historian Joann Fletcher, "so many Roman women followed the' look of Cleopatra' that for Cleopatra herself their statuary was often misunderstood."

Cleopatra and Mark Antony formed their own drinking club

In 41 B.C. Cleopatra began her famous love affair with the Roman general Mark Antony. Their friendship had a political component — Cleopatra wanted Antony to secure her throne and preserve the unity of Egypt, while Antony needed access to the wealth and capital of Egypt— but they were also famously fond of the company of each other. We spent the winter of 41-40 B.C according to ancient sources. Living a life of pleasure and luxury in Egypt, and even establishing their own drinking party known as the "Inimitable Livers." The group engaged in weekly feasts and wine-binges, and its participants also played in intricate games and tournaments. One of the favorite activities of Antony and Cleopatra reportedly involved walking the streets of Alexandria in disguise and playing pranks on its residents.

She commanded a naval fleet in war

Cleopatra eventually married Mark Antony and had three children with him, but there was also a massive scandal in Rome over their relationship. The opponent Octavian of Antony used deception to frame him as a tyrant under the sway of a scheming seductress, and the Roman Senate declared war on Cleopatra in 32 B.C. The next year, the war reached its culmination in a famous naval battle at Actium. Personally Cleopatra led several hundred Egyptian warships alongside Antony's fleet into the fray, but they were no match for Octavian's navy. Eventually the battle devolved into a rout, causing Cleopatra and Antony to break through the Roman line and escape to Egypt.

Cleopatra may not have died from an asp bite

Famously Cleopatra and Antony took their own lives in 30 B.C., after they had been chased by Octavian troops to Alexandria. Although it is said that Antony had himself fatally stabbed in the stomach, the suicide process of Cleopatra is less certain. Legend has it that she died by using an "asp"— most possibly a viper or an Egyptian cobra— to bite her arm, but the ancient chronicler Plutarch reports that “what really took place is known to no one.” He says Cleopatra was also supposed to hide a deadly poison in one of her hair-combs, and the historian Strabo states that she may have applied a fatal "ointment." With this in mind, many historians also believe that she was using a pin dipped into some kind of potent toxin — snake venom or otherwise.

The Queen of the Nile was depicted on the silver screen by the likes of Claudette Colbert and Sophia Loren but in the 1963 sword-and-sandal drama "Cleopatra" she was most notably played by Elizabeth Taylor. The project was troubled with issues with development and script and ultimately the budget increased from $2 million to $44 million — including some $200,000 just to cover the cost of Taylor's costumes. It was the most expensive movie ever made at the time of its release, and after raking in a fortune at the box office, it almost bankrupted the production. Bearing in mind stagnation, "Cleopatra" appears to be one of the priciest movies in history even today.